Tchatez avec le webmestre ? have a chat with the webmaster ? Download Yahoo messenger and look for xavier_martin_dupont as id Vous désirez me contacter téléphoniquement :06 11 73 67 85 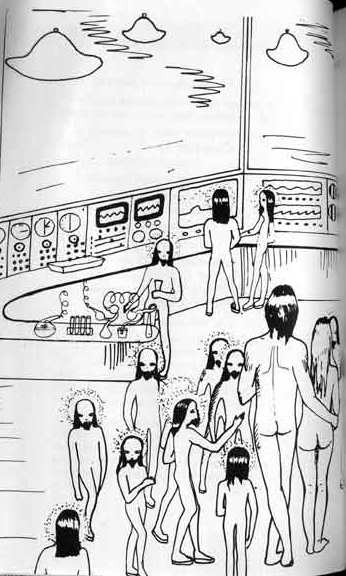 The opus that you have the honour and the advantage of observing here is quoted from the Raël's work : the book which says the Truth on page 24 (1978 edition )chapter entitled the Genesis.
It is thus supposed to describe the engineeringgenetic laboratory of a society which would be "25000 years" in advance" on ours.
The only problem is that obviously the iconography - analogical indicators, screens with curve - and all the remainder's, rather makes think of the representation that a twelve thirteen year old child could be done of an extraterrestrial base and this in the years 50-60.
As for the materials "of genetic engineering", what to say about the two retorts which everybody will in vain wonder to what they are connected. Nowconsidering the serpentine wich seem to emerge nowhere, it summarizes with the set of test-tubes posed on the desk all of the science of the elohistic genetics.
A curious problem of perspective must bee also noticed: an elohim is supposed to be around 1m 20, but if we compare to Adam and Eve (cf the title of the chapter) they are below the threshold - the size of the elohim on the foreground would be that of a child of 7-8 years) while if we sticks to the rules of the prospect, the elohims in the last plan must be a little close to the same size as our Adam and his Eve. Other point: the "creatures do not have any distinctive signs - milked faces concerns simple outlines, with share of course the famous goatee, and their eyes are summarized with features. The aureole is supposed to be the trace of the space suit - there still there is a contradiction - I leave to the specialists the care to guess which). One can also put some questions as for the anatomical coherence of those beings.

Also to notice that the proportions and the details of the couple are comparatively much better than those of the elohims. What can conclude from that if Raël undoubtedly saw a naked man and an adult woman, but that it is difficult to him to represent in a coherent way something that he never saw. However note a very clear improvement of the graphical elohim's chart on the in the other versions of the Book which says the Truth, which is posterior with this republication. Last note : the alien's seems curiously asexualed in any case any discernible trace through the combination to note the difference - with the second representation of the meeting.
What ask serious question is that graphically vaguenes and incoherent character of the elohims whereas Raël is supposed to be precisely the only one who have seen them, and we should expect under these conditions and for as outstanding meeting with another thing as these homunculus. Now briefly let us compare with the illustration of the same chapter for the edition of 1974.

Of course, if the two scene have no direct relationship, the creationist thematic remains the same one and has a side very high tech including for the time (cf. the representation of the ADN in the form of double helix). Remain the antiquated test-tube, on the matter. Another point: of course Raël is not any more the author of these illustrations, from where improvement of the quality of graphics.

Put our awareness now on the first scene: " the encounter"

It is useless to reconsider again the "childish" characters already empahized in my first comment, but let us note however that the scene represented in the two illustrations differs on many points. In the initial representation - that Raël is supposed to have drawn itself - it does not carry a jacket, contrary to the version of 1974. Note also the different attitude of Raël in both cases. Also let us raise that the meeting does not take place obviously at the same distance, which implies a contradiction on the narratif level in the account of the meeting such as it brought back it in addition. For the geographical framework of the two drawings which are supposed to represent the same places, it differ them too; let us say that we are here in the presence of an alternative of the play of the seven errors much more than of a meeting of the standard third. The only notable improvement compared to the scene of the genesis according to Rael is that it seems to have applied to its saucer, saucers which are some little bâclées in the first scene of the genesis.